Flexing, a lying phenomenon by naqoy 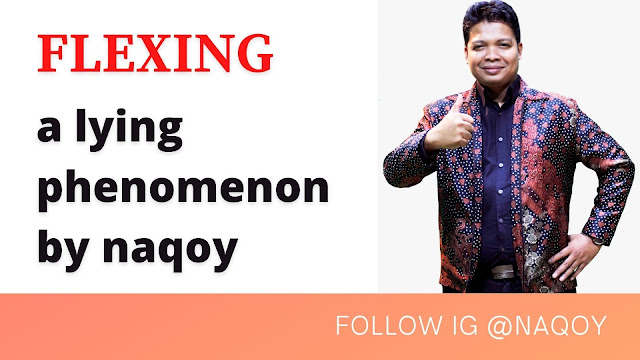 Flexing, a lying phenotype brother, Rae Sremmurd, created a viral song entitled "no flex zone," which means an area for people who are relaxing, like themselves, and not to brag or pretend to be different. Nowadays in social media the term "flexing" becomes a commonly spoken word, in slang words, 'flexing' is a word that has a meaning for those who boast, usually flaunting wealth. Flexing is considered to be a deceitful person who has a lot of wealth and a lot of money, even if his reality does not. Many believe that the word "flexing" also refers to a person who is false, counterfeit, or compelled to fit in with others in his company.

Today, more and more wealthy people, who claim to be rich and show off in social media, even referred to in the sultan's terms in certain localities, answer this so I am reminded of an aphorism "poverty screams but wealth whispers, "which suggests that the more people get rich they are not really" noisy "or loud about their money. The richer they get, the more they need privacy. Look how the wealthy in the cosmos are like Elon musk. Jeff Bezos, Bernard Arnault. - Bill Gates. - larry page. Mark Zuckerberg, Sergey Brin, and Steve Ballmer are even more straightforward and unpretentious. So I remember my mentor saying that "when you are truly rich, even wearing an undershirt one knows you are actually rich."

In 2017 a married couple uses wealth to earn money, display wealth to gain trust, and even show that an "Instagram " application to Paris and other countries, collect money for the umrah congregation and turn out to be a fraud, end up in prison because all the luxuries are fake. The term is "flexing." Many men do not yet own a house but already own luxury cars from loans to the bank in hopes of getting couples who are hypnotized by false luxuries. When a woman is attracted and eventually marries and divorces when she learns that her wealth is false.

Flexing is the present way of life that has now grown world especially developed countries like China. My friends in France tell me that customers in line for luxury bags come from developing and developing countries, while developed countries like Europe and America no longer need flexing, because they focus on quality and comfort. I was a bit surprised myself and just smiled to myself when so many of the events that show such a glamour even as a claim to be rich.

While a live broadcast of the rich social media child of millennial shows his family's wealth, suddenly found its way into the comment column of RI's taxpayer, it all became difficult. In marketing too "flexing" is often used to attract customers. Even today there are organizations in the world that train women to have rich men's husbands by doing flexing, there are training devs for those who target their calls, from how photographs with a rich background or how to use fabulous bags or shoes, even being taught how to repay the way that shows the rich people. Some have successfully attracted wealthy artists or athletes to disappointment in the end.

Founder And Master Trainer The 7 Awareness